Life is all about change. When you trust an unchanging God - you have the ability to embrace change and trust Him in the midst of it. Join me as the Lord leads me through a new phase of my journey.

Monday Musings ~ Criticism on a Platter

Today is my birthday.  Birthday's have always been huge celebrations in my family.  I may have been an adult before I realized my birthday was not a national holiday.  Of course, every 7 years it falls on Thanksgiving, so occasionally, it is!  I celebrate my 55 years because the majority of them have been lived walking with Jesus.  They have been good and they have sometimes been hard, but I wouldn't trade a moment of those years.  So - I celebrate my days that are behind me and eagerly anticipate the days to come. 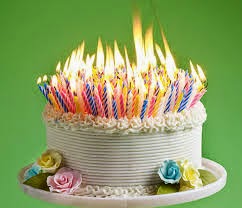 I think I'm going to need a bigger cake!

I read a very familiar passage this week but as the Holy Spirit works, got a completely different message from it than any other time I have read it.  I love that about the Spirit -- He makes familiar things new all the time.  My reading was in Matthew 14.  It is the account of John the Baptist's death.

Herod and his sister in law, Herodias, were having an affair.  John called him out on it, never hesitating to speak the truth, and needless to say, Herod did not appreciate it.  Neither did Herodias.  They wanted what they wanted.  Herod had John arrested but feared harming him because he was popular with the people.

Then . . . Herod's niece had a birthday.  A party was thrown in her honor.  She danced before Herod and he was so carried away by her performance that he promised to give her anything that she asked of him.  I don't know what she was thinking, but she decided to consult her Mom.

Herodias knew exactly what she wanted.

The head of John the Baptist on a platter.

Herod was not pleased, but he had backed himself into a corner and did not want to be embarrassed in front of his guests.  The beheading was carried out and the head of John the Baptist was presented to Herodias, on a platter, as a gift from her daughter.

Who wouldn't be mortified by that?  This account is full of all kinds of wrong.  It has adultery, pride, vengeance, and murder.  To top it off, a young girl is made complicit in the betrayal of her father and the death of an innocent man.

Herod and Herodias silenced their critic.

Now, I'll admit that was a drastic measure to take.

But don't we all do this in our own way?

*We no longer call the friend who risked pointing out something that needs our attention.

*We stop listening to the pastor who speaks of sin and opt for a kinder, gentler gospel where life choices and relative morality reign.

*We lash out and counter attack.

*We ignore and dismiss.

*We drag others into our drama.

*We turn a deaf ear to the whispers of the Holy Spirit.

*We behead the entire criticism rather than look for the truth in it.

Taking criticism well has never been my strong suit, but I have grown tremendously over the years in my ability to do so.  I'm still learning.

I have learned to sift through what is said and seek the Spirit about the truth that falls through.  I want to learn and grow from the criticism of others.  I want to be teachable, pliable and ever changing in the hands of the Lord.


I have grown to appreciate those that love me enough
to say something hard.

I have grown in my desire to be more like Jesus -
even when words sting.

I have grown to embrace the refining fire
of criticism, exhortation and truth.

I have read this account many times and there are so many lessons to be learned, but today, I had to ask myself . . .

Whom have I beheaded?

Why am I so angry about something that was said about me?

Am I seeking growth from both criticism and encouragement?

Am I turning a deaf ear to the Spirit in favor of my own agenda and comfort?

Am I saying "la, la, la" in my mind when I should be listening?


Certainly not every critic is someone to heed,
but it is far too easy to dismiss them all.
Posted by Chrisann at 9:42 AM No comments:

Happy Monday!  Fall is on its way out and winter is on its way in.  Changing seasons are my favorite.  Fall leaves will soon give way to snow flakes.  Embrace it! 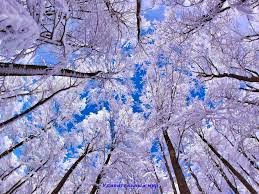 For a day in Your courts is better than a thousand outside.
I would rather stand at the threshold of the house of my God
Than dwell in the tents of wickedness.
For the Lord God is a sun and shield;
The Lord gives grace and glory;
No good thing does He withhold from those who walk uprightly.
O Lord of hosts,
How blessed is the man who trusts in You!

Sometimes the things of this world look pretty good.

Sometimes it seems easier to stand outside the courts of God

where self is god,

where morality is relative,

where sin is celebrated and even sought after.


Sometimes, it is tempting to just go on over to the tents
of the wicked and relax for awhile.

But those moments fly by quickly.

God is my sun and my shield.

He is my light and my protection.

He gives me His grace and His glory.

He does not withhold any good things from me as I live for Him.

What are those good things?

But they are better.

What are those good things?

These are good things and they are mine -- no matter what -- forever.

I would rather experience and know God Himself
than have anything else out there.

I'm pondering on Tuesday this week since I had jury duty on Monday.  What an interesting experience!  I was picked for a jury first thing in the morning and the trial was over by the end of the day.  It was a good experience to be involved in that process but I was thankful it was only a day.  The justice system is amazing but it is tedious!

I've been thinking about this post since I flew back from Texas to Chicago on Sunday.  When I boarded the plane from DFW to O'hare, I was seated by a very large man.  I felt for him as I got over to my seat.  He didn't fit in the seat very well.  He was pressing against me and had to ask for the seat belt extender.  I know that must be a difficult situation to find yourself in as our seats in airplanes, movie theaters and waiting areas are only comfortable for some.  I could tell that he felt awkward.  I felt a bit awkward too - for both he and I. 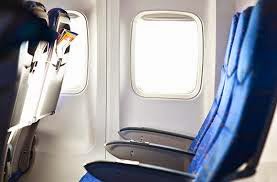 It made me think about all the ways that we don't fit.

Maybe you don't fit in at a family gathering.

Maybe you don't fit in with your co-workers.

Maybe you don't fit in with your neighbors.

Maybe you don't fit in anywhere.

It is as if you are a square peg in that proverbial round hole. 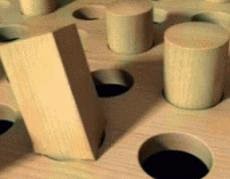 There is good news.

You were created for God's good purposes.

You were created as a unique child of the King.

You were created to be part of a bigger story that is continually unfolding.

You fit perfectly in the Father's plan.

You fit beautifully into the body of Christ.

You fit securely into the righteousness of Christ.

You fit safely in the Father's hand.

In Jesus, you are just the right fit.

For we are His workmanship, created in Christ Jesus for good works,
which God prepared beforehand so that we would walk in them.
Ephesians 2:10

Chrisann
New York City, NY, United States
I live in New York City, I am married to Alan (32 years and counting) and I have two daughters. Ashley is my first born (works as a custom painter and designer) Ashley is married to James. They live in Ft. Worth, TX. They have a precious little boy, Owen. Heather is my younger daughter, who is married to Cooper. They have a precious little boy also -- Cooper! They have a puppy named Miles. I also have a wonderful dog named Quincy! I get to spend time up at Vallecito Lake near Durango, Colorado. I am blessed beyond measure.